Someone out there is trying to figure out how strong I am.  Fitting, after my last post, I suppose.

Let me give you a glimpse of my last week or so.

Two weeks ago we brought our dog Buddy in for his annual exam.  Since moving down here, he's lost weight, we walk at least once, if not twice a day, etc.  He's like a puppy (albeit an almost 12 year old one).  We comment all the time about how he benefited most from moving here - he's got a new lease on life.  The new vet decided to do some blood work, simply because of his age and to get some baseline numbers. We got a call the next day that he's experiencing kidney failure.  As the words were trying to be processed, we were handed 5 new medicines, an order form for new food, scheduling dates for follow up blood draws and told that he only has a few months.  Our life kind of halted... we thought that he just gained a few years.  So we're being tested with that.

Then last Wednesday we found out that my grandfather has taken a turn in his health and hospice thought that it would be wise for the family to get in to see him.  He and my grandmother are living with dementia/Alzheimer's, but my grandfather is bleeding and will loose enough blood that at any time, he'll go to sleep and not wake up.  He's 92.  He's had an incredible life, loves my grandmother more than anything in the world, loves his children, grandchildren and great-grandchildren more than any one person can love another in my opinion.  He's been such a rock for our family, an example of what true happiness is.  I needed to see him.  I flew out Thursday morning to Raleigh.

Or should I say Thursday afternoon.  You see, I got to the airport in ATL around 7:15 for my 8:40 flight.  Security was long, but the lines were moving.  I went through security and was "randomly" selected for another scan.  That always happens to me - it seems their random machines aren't so random.  The TSA guy swiped my right hand with some gauze thing and put it in a machine.  Alarms went off.  He looks at me and says "I didn't change my gloves so let me do it again with new gloves on". Okay.  They swiped my other hand and nothing happened. The TSA guy looked perplexed and asked his supervisor what he should do. They told me that I needed to be patted down in a back room.  I waited for two women (one to pat and one to witness) and we went to a private room, you know... because I look super dangerous in my running skirt and teeshirt.  They did a thorough pat down and the woman did another swipe thingy, this time of her glove after she patted me down.  The alarms went off again. The two women whispered and the "patter" left.  The other girl asked what kind of lotion I used and said that they had to call the bomb squad up to search my stuff.  Fan.Freaking.Tastic.  At this point, it's nearly 8:20.  And for some reason they couldn't figure out how to call the gate to tell them I'm here but just being held up.  So here I am, in the ATL airport which was busy as could be with the bomb squad searching my stuff (although, it should be noted that they never searched my purse... just my suitcase).  They didn't find anything (obviously) and sent me on my way with the advice of "you better run because you're probably going to miss your flight".  Awesome, thanks.  I ran to my gate and missed my flight by about 3 minutes.  That was 8:43 and the next flight left at 2:35.  Yippie... 5.5+ hours of free time in the airport.  No better way to spend my day!  I'm telling you... I'm being tested.

I finally did get to NC.  I had a great visit, albeit emotional, with my grandparents.  They were happy, and loving and that's the way I will remember them.  I was part of their sacrament of Anointing of the Sick, I got to take pictures and videos of them, I got to be with my family, etc.  It was good.  It was hard. 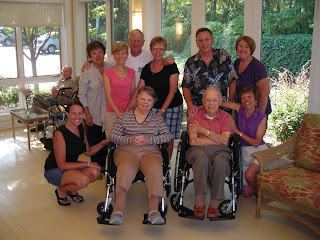 After a long, emotional weekend, I arrived home yesterday at 7:45am.  Tom was waiting for me and I just crumbled.  I think exhaustion had gotten the best of me. By the time we got home, I had decided I wanted to hop on my bike (because really, I'm never too tired to ride).  We got out around 25 miles and both were kind of "eh" about the ride.  That happens a lot lately.  We decided to turn around and come home.  Around 35 miles into our trip, we turned a busy intersection and Tom hit what he's calling "road furniture" - a huge hard white half basketball size piece of plastic that the great people of Atlanta think is going to corral traffic.  I saw it coming and couldn't get the words out fast enough.  Up he went, flying through the air.  His bike smacked first, then his body, followed by a not-so graceful roll off the road.  He was bleeding, his fork was in three pieces and I was stunned.  We gathered the bits and pieces that went flying and an amazing stranger came to our rescue, loaded us and the bikes and drove us the 15 miles home.

I'm a good student, but please, whoever is testing me, just give me an "A" and let me move on.


My motto for this year was and still is "I believe in me".

Funny, right?  I mean, if you've met me you probably know my personality and that I'm a fairly confident person.  I don't mind dancing to the beat of my own drum (and yes, it's a funny dance, but you should hear the beat in my head!).  I'm not worried about what people thing of me.  I present myself as knowing who I am and what my purpose is in life.

I've always struggled with believing that I am what people tell me they see.  I've talked a little bit about how I can't take a compliment (I am working on saying "thank you", but that's a lot harder than I thought it would be).  I'm more timid and reluctant to just say "I am pretty good at x, y and z".  I usually don't take credit for a job well done.  Instead I try to minimize it, but saying how easy it was or what I did to cheat the hard part, even if I worked my butt of to finish the job.

That's just me.  The true and honest me.

Where the "believe in me" REALLY comes into play is with training this year.  Man oh man am I struggling with this.  You'd think that this is the first season that I've ever trained or race and that I don't know what I'm doing or what lies ahead of me.  Every swim I get bogged down with how slow I am.  Every bike it seems like the pedal strokes are harder.  Each run, I struggle to put one foot in front of the other.  I've said "I can't" more than "I will". And it's hard.  I've quit the sport of triathlon probably 10 times this season, simply because I feel like I'm not good enough and I can't do it.  I've cried.  I've kicked things.  I've used the words "hate", "suck", "chore" and "miserable" more times than I can count to describe training.

But then I have a weekend like this past weekend.  I was with my favorite training partner and great friends... people who are absolutely amazing people, inside and out.  Friends who exude confidence and do what they love because they can, not because they have to.  They believe in themselves.

I may not be the fastest, or the strongest, or the smartest, but I'm better than I give myself credit for.  And while other people believe in my abilities, be it to bike up a mountain, run on a trail, or whatever, the greatest gift I can give myself is believing in me.