I'm over you August

This month has probably been one of the most trying months of my life.  I won't even bore you with all of the details, but let's just say that September can't come soon enough.

September is one of my favorite months of the year.  It starts with a holiday weekend.  Then college football starts.  The weather gets a little cooler (hopefully... I'm not so sure about September here in Atlanta yes!).  And finally, my hubby and my dog have birthdays.

That's a lot of awesome after a lot of suckage (totally a word... just trust me).

So with that, August, I know you still have two and a half days left to make my life hard, but September... I can't wait to see you!!!

I was tagged by the one and only Heather-O!

The Liebster Award is given to upcoming bloggers who have less than 200 followers (or as it stands now, have less than or more than 200!).
The meaning: Liebster is German and means sweetest, kindest, nicest, dearest, beloved, lovely, kind, pleasant, valued, cute, endearing, and welcome.
Rules for receiving this award:
1. Each person must post 11 things about themselves.
2. Then answer the questions the tagger sent for them, plus create 11 questions for the people they’ve tagged to answer.
3. Choose 11 people and link them in your post.
4. Notify the people you have tagged.
5. No tag backs.

MY 11 things:
1. I'm craving the beach something fierce right now!
2. It's starting to get a little cooler and I can't wait to wear jeans. :)
3. I'm totally in love with pineapple Chobani yogurt right now.  I eat one every morning.
4. I am trying to cut out soda and I have a raging headache.  Damn you diet coke.
5. I finally cracked and read the Fifty Shade trilogy.  They were as bad as everyone told me they would be.
6. I have about 6 countdowns on my desk top right now and they all happen within the next three months!  Exciting times ahead.
7. I finally found tickets to a Zac Brown Band concert within driving distance.  We're all over that like white on rice!
8. Reece Pieces could possibly be the best candy ever invented.  I'm never NOT in the mood for them.

9. I still loathe the hills in Georgia... when will I learn to like them?
10. I'm going to miss going to the Delaware Fair this year.  It was such a great tradition for Tom and I.
11. I'm missing my REV3 family and can't wait to see them all soon.
Heather's questions for me:

1. Do you see yourself living at your current location for the rest of your life?  If not, where would you like to live? At this point, yep.  I used to joke when we were going through the whole moving process that once I found a house, I would die here simply because I never wanted to move again in my life.  At this point, I love the house, the neighborhood, the town, etc.  I can't see myself moving again.
2. What is your dream job? You mean, what do I want to be when I grow up?  Hum... I don't know.  I love working for myself so I'd probably want to keep doing that.  Maybe a travel agent, although I'd love to be one of those secret shoppers who gets paid to eat at restaurants and ask questions of the servers and then get paid to critique them.
3. What's your favorite thing about yourself (physical or psychological)? My ability to keep it real.  What you see with me is what you get.  I have never been one to be fake or to conform to what everyone else thinks is right.
4. What is your favorite food that if you could eat it everyday without gaining weight, you would?  Pasta and cheese, preferably out of the blue box with extra butter.  YUM!
5. What is your favorite sport to watch in the Olympics? This summer it was swimming.  Probably because it still boggles my mind that they swim at least twice as fast as me, if not more at every distance.
6. What is the sport you wish you could compete at in the Olympics (even if you have never played this sport in your life)? The floor routine of gymnastics.  How fun would it be to fly through the air? :)
7. What is your favorite workout? Depends on the day.  I love a nice flat ride with my friends, but I've been known to enjoy some trail running these last few months.
8. What is your favorite thing to do while riding the trainer indoors on a cold rainy day? Read People Magazine or what my taped DVR shows.  Anything to keep my mind off the fact that I'm on my trainer.
9. If you could go back in time and do one thing over or change one thing, what would it be? I would have kept my Organic Chem classes and gotten my minor in Chemistry.  I only had three classes and I probably could have made a lot of money being a drug pusher with a business AND chem degree.
10.  If there is a book and a movie that are the same, do you prefer to read the book or watch the movie, or both, and in what order? I'd watch the movie because it's faster and I tend to remember the characters better when I see them in person. :)
11. What is your favorite childhood memory? My parents always spoiled us with trips - we traveled all over as kids.  My favorite trip was the one out west when I was maybe 13.  We went to the Grand Canyon, on a Pink Jeep Tour in Sedona, on a rafting ride and then to Vegas.
My questions for you:

1. What is your favorite pizza topping?
2. Why do you blog?
3. Going on a vacation and you can bring three people - who would you bring?
4. What's the best thing that's happened to you this year?
5. Do you have a secret that you've never told anyone?
6. What is the most amazing trip you've ever been on?
7. What keeps you motivated?
8. What's the one food you couldn't live without?
9. Do you watch reality tv and if so, what show is the best?
10.  Can a girl have too many shoes?
11. Sunny and hot or sunny and snowing?

Before I get to the recap of a great century ride this past weekend, I want to thank you all for the supportive messages that you left on my last post.  Just an update - Tom is doing great.  Just a few scabs left, but he's back in full speed.  We did find out that his Orbea had more damage than we thought so we laid Boom to rest on Thursday night.  :(  Tom's had fun building up his new tri-bike... a reincarnated TT1 bike from RAAM 2010.  It's pretty sweet.  Second, Buddy is doing great.  We have another blood draw Thursday with the vet.  He loves the new medicine (the fact that I hide it in tuna or chicken I'm sure has something to do with it), but he's been a champ.   And finally, my grandfather passed away last Thursday morning in his sleep.  If you knew my grandfather, he wouldn't have wanted anyone to see him suffering and would have wanted to be with my grandma, and that's exactly what happened.  It's never easy to lose a loved one, especially one as amazing as my grandpa, but we know that he's watching us from above, with his daughter, waiting to be reunited with all of us some day. This was a picture with him from a week a half ago.  So incredibly glad that I was able to tell him that I loved him in person just one last time. 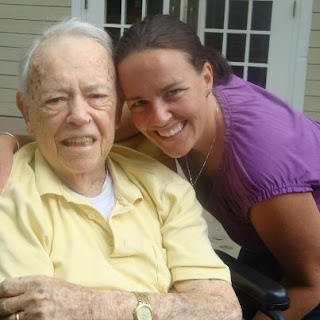 So as you can imagine, the last few weeks have been crazy.  Training has been sketchy (although I'm seeing a pattern here since moving to Georgia as that's fairly common).  Tom and I had signed up for the Covington Century a while ago after being told it's one of the flattest organized centuries out there.  Um... yep, that had Kingery written all over it!  I was pretty apprehensive going into it though.  The longest I had ridden this season was 70 miles, once, and it wasn't pretty.  But I pulled on my big girl panties and got my mental state right.  Plus I knew that I'd be seeing George, Kacie, Karen and Summer so that totally made it more worthwhile.

We got up at 5 Saturday morning and did the typical Kingery-stall.... it goes kind of like this:

We made the drive to Covington in the dark and as the morning lightened, we notice that it's super cloudy.  Weather says 25-30% chance of rain.  Hopefully it'll just stay cloudy and cool for the day.  We got to the ride sight, registered, get the bikes ready, text my peps, and meet up with Kacie and George.  It's a mass start with a crazy number of yahoos (I swear I'm shocked that there aren't more casualties from organized rides) and for the first 20 miles, Tom tells me he feels like he's going to flip over his handle bars, ala last weekend.  His blood sugars drop.  It's going to be a long day.  We let Kacie go ahead and I work hard to remind him that this is fun, we're together, we chose to do this, etc.  Hum... it's not working.  And then it happens...

The skies open up and for about 35 miles, it pours.  Now I'm not talking sprinkles here and there.  I'm talking pelting rain that stings as it hits your skin. We also miss a turn (where the 66 mile route and the 100 mile route split).  We don't figure this out until 2.5 miles up the road.  Awesome! Tom goes through another very low point, deciding to quit triathlon and never bike again.  Part of me is annoyed, the other part is singing stupid songs like "singing in the rain" in my head.  I mean, really, what can you do?  Around mile 50, it lets up and we both just look at each other and laugh.  We're soaking wet, but the roads are flat, we have food in our bellies, and we're together.  To me, that's what it's all about some days.  We decide to just make the most of it and we do.

We keep meeting up with Karen and Summer at the aid stations and they make me smile, as always.  On the roads, it's just the two of us, talking about our life and what lies ahead.  We are reminded of Ohio multiple times looking at the countryside, and then reminded that we are in Georgia when we see things like a dead armadillo on the road.  It's the best of everything.

We end the ride strong.  And happy.  I actually felt great and was pleasantly surprised.  I could have kept riding, although the car was a happy sight.  We saw a ton of people transitioning and although I probably should have joined them, I figured the extra five miles of riding that we did made up for the transition run.  Plus I had important things ahead of me that night that I needed to get home for... George's birthday celebration!!!  :)

I feel like I'm one step closer to my end goal.  And that makes me happy.