1.  I'm 39 weeks and 2 days pregnant.  I can barely form a rational thought, let alone an entire blog post so forgive the top ten list style post.  It's the easiest way to keep my thoughts in one place.  And yes, this explanation actually counts as one of the ten things so I really only have to do 9. :)

2.  I have a feeling it's going to be a hot summer here in Georgia.  We lucked out last year with a relatively mild summer - aka, we didn't need the ac on all the time.  It's gotten to the point where I'm pushing my limit of heat tolerance within my own home.  As a very wise George Darden explained this past weekend "the South wouldn't exist if there wasn't air conditioning".  Amen brother!

3.  I sat in bed this morning watching my sleepy husband come to a living state (one of my favorite things to do).  It's usually fairly cute to watch as he sleeps so soundly once he falls asleep.  As he was coming out of the comatose state that he had been in, he rolls over and says something to the effect of "we are all dying.  Every day we die a little more".   I said "but Abigail will be born soon, not dying" to which he responded "the day she's born, she'll slowly start dying too". Well good morning my love and thanks for the positive start to the day.  I still don't totally know where that came from, but we got a little bit of sugar in him as his blood glucose level might have been a wee bit low and moved on with our day.We'll just leave it at that!

4.  This past weekend we had probably one of the best Memorial Day holidays we've had ever.  Saturday night we went to a place called Masterpiece Mixers where we painted canvases.  I have been eying the place for some time now and have always wanted to go which is ironic considering I have zero artistic ability in me.  Maybe that is what fascinated me.  So I dragged Tom set up date night with Tom (they do serve beer and wine so it wasn't a hard sell) and we went for a two hour canvas painting adventure.  It was awesome.  And I must say, for us having absolutely no artistic ability, the pictures came our really really well.

I want to go back when I can drink and maybe bring some open minded friends who would be interested in going.  Then, on Monday, we went to Stone Mountain with Matt and Jen Smith, had a picnic, I showed off a little of my bilingual abilities, we walked through the woods, etc and then had a cook out that night complete with Kacie and George.  The 6.5 of us (Caffrey was there and although he's a person, he didn't participate much in the conversation) had such a great time.  Many many laughs which is just what I needed!  It was in fact a perfect weekend!

5.  It was like Christmas in our house this morning.  Around 9am, FedEx delivered a big brown box and then around 11, UPS followed suit.  Although UPS was just bringing me a breast pump (I'll spare you the pictures and details... trust me, it freaks me out too people), the FedEx guy was the one I wanted to hug.  You see, I'm part of the Brooks ID program.  And since getting accepted, my running has gone down hill (you know... baby + smuggling a basketball + hills = walking) so last week, after having a woe-is-me kind of day, I went shopping at the Brooks site.  It was glorious.  I had so much fun.  And really, it was all about motivation.  I ended up getting a bunch of swag - new shoes, a visor, three shirts and a pair of shorts. 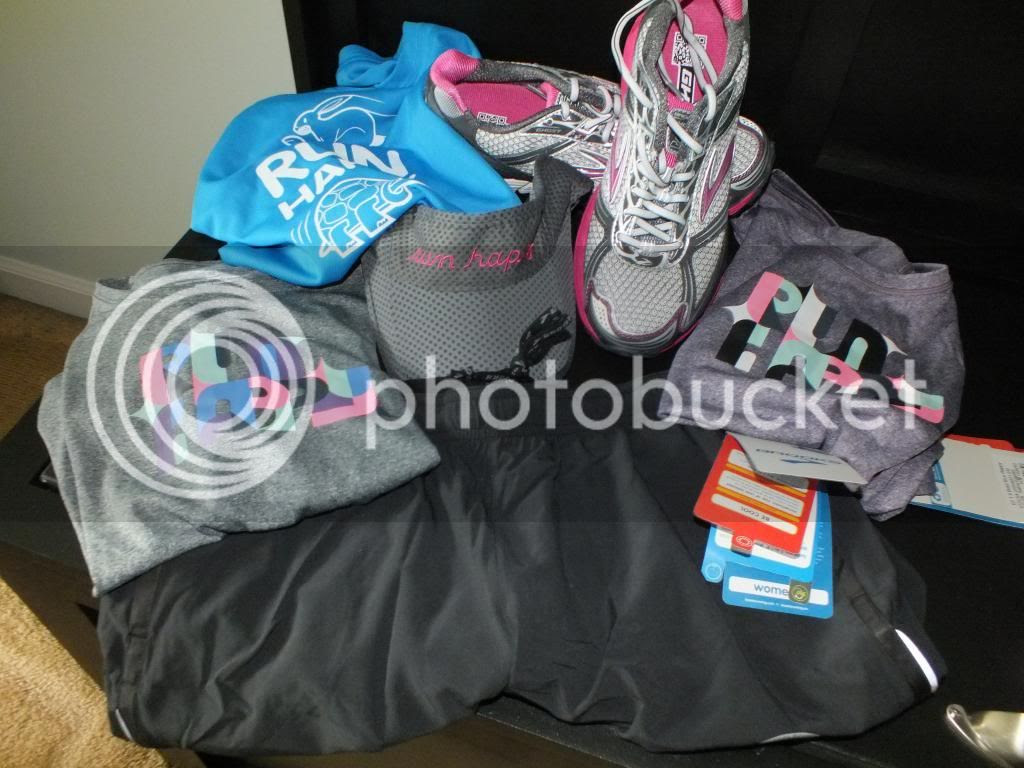 I of course can't try any of it on (except for the shoes and visor), but it's sitting there, staring at me and ultimately motivating me.  One of the things I miss most is lacing up my running shoes and just going.  I can't wait for that!  Thanks Brooks... you rock!

6. Speaking of running and itching to get back, I am.  Triathlon though, eh, not so much.  It's weird.  I get twinges of wanting to do a tri soon and then I think about the training and the logistics (which I've done a bajillion times) and I just get discouraged about it all.  I don't know, it's weird.  It'll come back I'm sure.  We were walking the other day and Tom says "so what are your thoughts on IMFL 2014?".  My response - "I would love to cheer for you there".  I have zero desire to do an Ironman.  None.  Zip.  Zilch.  But then the conversation went on to talking about what halves would be fun - maybe Gulf Coast next year.  Maybe hitting up a good ole' Deer Creek in Ohio (I love me some small flat racing).  We'll see.  Tom and I are sharing a bike right now (don't ask... it's not worth it) so that could determine some things.  Oh... and being a new parent.  That too.

This is a very important staple in my pantry right now (Heather, you will appreciate this, trust me).  I have two boxes waiting for me.  It's always been my "reward" meal after the Ironman.  I Love me some blue box mac and cheese (and all it's buttery goodness) but we know that there is zero nutritional value to it.  When the time comes, Tom's going to get word that he has to make this.  That will be the sign that I'm going into labor.  I was told to eat something carby (this after them telling me that childbirth would be like a marathon - hopefully more like a stand alone and not the one that is part of an Ironman and that I needed to have calories in me).  I know that when I get to the hospital, I'm allowed a luxurious meal of ice chips (don't be jealous).  Our hospital went on to brag about their ice machine which "makes ice chips just like Sonic".  Really?  That's a selling point?  Now if you told me they had a tater tot machine just like Sonic, then that's something to write home about. Ugh... What am I getting myself into? 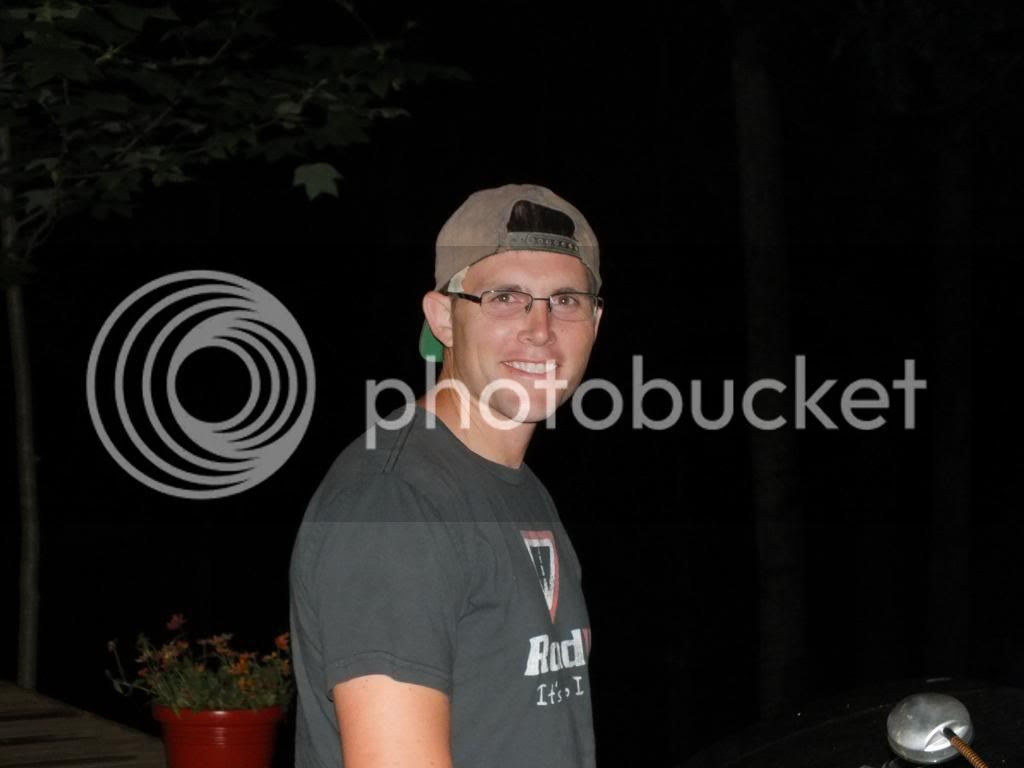 In the 10+ years that I've known him, I've never seen him with a hat on.  The other night I walked outside and found him like this.  Doesn't seem like much, but it was memorial day weekend and this was his PaPa's hat.  I asked him why he was wearing it (it usually hangs in our garage with a pair of his PaPa's work shoes) and he said, "My PaPa was a vet and died 15 years ago". :)  Made me smile.  He wore the hat most of the weekend before hanging it back up.

9.  In the next two months, I get to see my mom and dad, my sister twice, my brother in law and my in laws.  That makes me smile.  (shut up, they are totally coming to visit Tom and I and not to see the baby)

10.  Don't forget that I'm fundraising to support Kacie, Dani and Camp Twin Lakes as they prepare for RAAM.  If you would like to make a donation, no matter how big or small, we would all REALLY appreciate it.  You can donate here.  I talked to Kacie a bunch this weekend and although I'm sure she's a tad nervous, these girls of Power, Pedals and Ponytails are going to rock it.  I'm so excited for them!!!

What's new with y'all?

Ramblings by Unknown at 5:42 PM

I love the paintings. I have 0x0 ability to do any kind of art...though I did have a really fun time painting ornaments with friends.

I'm so excited for you and lil baby!

PS which Brooks did you get? I'm in the market for new shoes. The ones I was wearing when I fell were old (and plus, now even if they were new I wouldn't want to wear them!). My backup pair are getting use, but only one side :).

I was thinking of trying ghosts, what are your thoughts? I'm not a pronator, in fact, the opposite, hence the rolling of the ankle.

Wow, you're in the home strech now! Hospital ice chips are the bomb but make sure you find out where they keep the ice packs for after the birth! : )

I can't believe how fast it is going (I wonder how many times I have used that in a comment!) It's almost time and you are going to be a great mom, you have so many things ahead of you!! Oh, and you also got me wanting mac n cheese - thanks....

Hanging out with you guys is always a blast. Pretty soon, it'll be the six of us! Those grillers were so good! Tom knows what he's doing. I'm glad you love him so much and share that with everyone. It's a really good thing. Plus, it's so obvious how much he loves you too. I guess that's how that's supposed to work, huh?

Cool Brooks stuff! You'll be wearing it in no time.

I really liked y'alls paintings. Jenn and I need to go do that sometime soon.

This is the hardest part isn't it? Knowing that it will be happening soon, but having no idea when? I'm too much of a planner.

Looks like you have been having lots of fun... painting, picnics, etc.

We are stocked up on the blue box as well :)

This post made me kind of emotional. Not sure if it is the memory of those final days before having my first baby, the beauty of your and Tom's love, the thought of creamy mac-n-cheese or what. LOL Loved it all. Happy for you and can't wait to see all the wonderful baby pics.

I had a hard time eating before going to the hospital. I was already in labor, contracting, and just couldn't eat. Our hospital provided us with Popsicles too. It was yummy. Praying for you! Getting close!!